HK the focus in new stage of regional, international cooperation 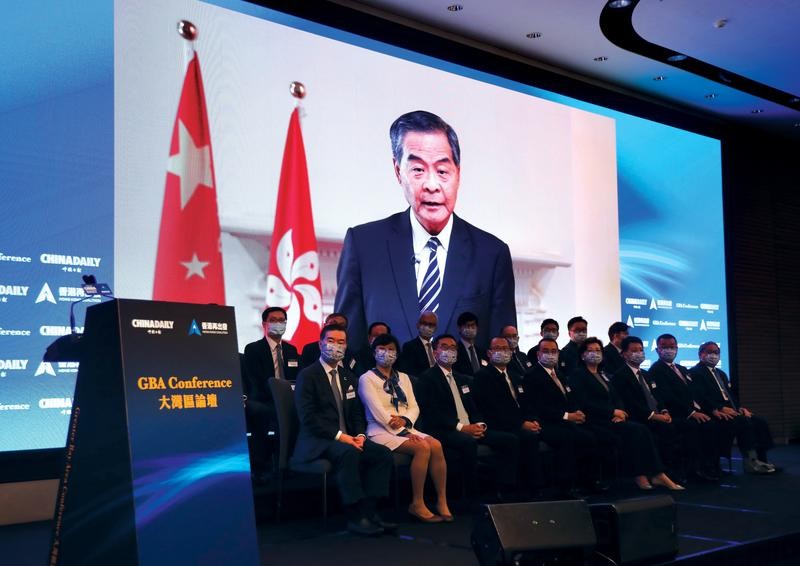 Hong Kong, not yet an official part of the RCEP, is in a key position to deepen ties among all players of the world’s largest trade deal. A well-integrated Greater Bay Area is the starting point for its new role. Oswald Chan reports. Hong Kong’s status as a regional professional services hub will be strengthened by the Regional Comprehensive Economic Partnership, so the city should launch a global publicity campaign to promote the professional services sector, panelists said on Tuesday at a roundtable conference organized by China Daily and the Hong Kong Coalition. Themed “Embracing New Opportunities: Connecting GBA with RCEP”, the roundtable meeting consisted of a physical conference held in Hong Kong and a virtual event of about 400 people, including government officials, business leaders and academia members to discuss and provide updates on the new opportunities for Hong Kong and the Guangdong-Hong Kong-Macao Greater Bay Area. “Within the RCEP, the Chinese mainland is the biggest market of professional services, and Hong Kong the biggest overseas provider. Hong Kong is extremely well placed to facilitate foreign firms in utilizing the new access to the mainland market under the RCEP,” said Leung Chun-ying, vice-chairman of the Chinese People’s Political Consultative Conference National Committee. In delivering the keynote speech through a pre-recorded video, Leung said that Hong Kong’s professional services of banking, insurance, information technology, logistics, intellectual property and maritime services, including ship registration, marine insurance and legal services, are sought by mainland business enterprises. According to Leung, the total Hong Kong trade in services amounted to $180 billion in 2019, or about 49 percent of the city’s GDP. The RCEP, comprising the 10 ASEAN nations as well as China, Japan, South Korea, Australia and New Zealand, will be the world’s largest free trade agreement that accounts for 30 percent of the world population, one-third of the global GDP, and nearly one-third of global trade. It will come into force on Jan 1. ‘When the boundary check-up points are reopened, albeit partially, Hong Kong has to execute a catch-up plan. We should launch a global publicity campaign to tell our RCEP partners that Hong Kong the super-connector is back in business, and that Hong Kong has a unique role in the GBA,” Leung highlighted. Liu Guangyuan, commissioner of the Ministry of Foreign Affairs of the People’s Republic of China in the Hong Kong Special Administrative Region, said that the country stands ready to work with other countries to develop the advantages of the Greater Bay Area, and enhance its facilitating role in the “dual circulation” economic strategy. “We will strengthen connectivity in the GBA and establish high-standard rules compatible with the RCEP. We will promote hard connectivity of infrastructure and soft connectivity of rules and mechanisms, and accelerate efficient flows of factors to maintain a stable global supply chain, advance economic integration and share benefits across the world,” Liu said during the keynote addresses. The country will take the RCEP as a great opportunity to expand cooperation with relevant countries in the digital economy and green economy, and jointly build demonstration zones for economic innovative development, Li added. “The RCEP is a win-win proposition. While the enhanced investment flow helps developing member states to raise the standard of production and income levels, and thus move up the value chain, developed economies can cut down on overhead by setting up manufacturing bases in the ASEAN states while also catering to those markets,” said Zhou Shuchun — a member of the Standing Committee of the CPPCC National Committee and publisher and editor-in-chief of China Daily — through a pre-recorded video. Hong Kong Coalition Deputy Secretary-General Eva Cheng told panelists during the welcoming remarks: “Hong Kong, as a major metropolis, has always been smart about integration. I offer that the best place to start doing all this is close to home and with neighbors who know and understand. This is why connecting the GBA with the RCEP is of particular significance.” The Greater Bay Area, consisting of nine mainland cities in Guangdong province and the two special administrative regions of Hong Kong and Macao, has a total population of more than 86 million with a combined GDP of nearly $1.67 trillion. Contact the writer at oswald@chinadailyhk.com