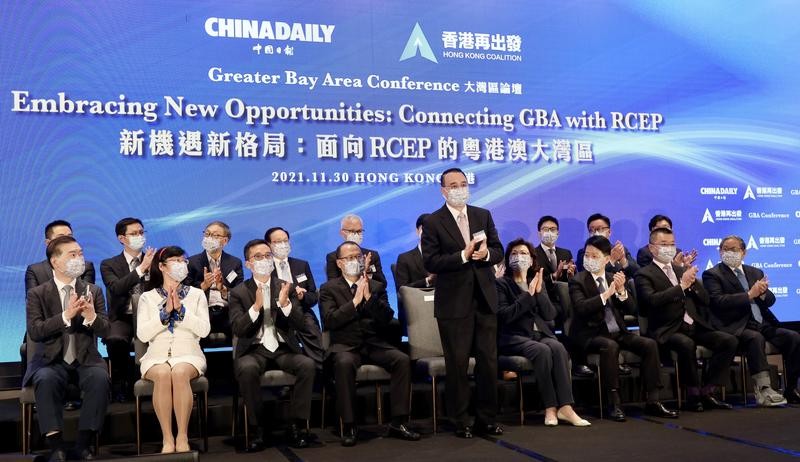 Hong Kong should be more proactive in identifying and embracing new opportunities for connecting the Guangdong-Hong Kong-Macao Greater Bay Area to the Regional Comprehensive Economic Partnership to achieve further economic and social progress, panelists said at the Greater Bay Area Conference in Hong Kong on Tuesday. The event, held both online and offline, was organized by China Daily and the Hong Kong Coalition on the theme “Embracing New Opportunities: Connecting GBA to RCEP”. It brought together about 400 people, including government officials, business leaders and academics, to discuss and provide updates on the new opportunities for Hong Kong and the GBA. “The significance of the RCEP to Hong Kong lies not so much in Hong Kong itself being a producer or a consumer, we are too small for that, but in our close relationships with the Chinese mainland, a huge producer, assembler and ultimate consumer. And the GBA is a significant part in this equation,” said Leung Chun-ying, vice-chairman of the Chinese People’s Political Consultative Conference National Committee. “Hong Kong plays an important role in merchandise trade between ASEAN (the Association of Southeast Asian Nations) and the Chinese mainland. Hong Kong should rediscover its role in north-south trade between the mainland and ASEAN,” Leung said in a video speech. The RCEP, comprising 10 ASEAN nations as well as China, Japan, South Korea, Australia and New Zealand, is the world’s largest free-trade agreement, accounting for 30 percent of the world population, one-third of the global gross domestic product and nearly one-third of global trade. It will come into force on Jan 1. Liu Guangyuan, commissioner of the Ministry of Foreign Affairs in the Hong Kong Special Administrative Region, said: “Our office will continue to serve Hong Kong through diplomacy, firmly support Hong Kong in expanding foreign exchanges and cooperation, and give full play to its established advantages. “We are determined to help Hong Kong to engage more deeply with the GBA and the Belt and Road Initiative, so as to contribute our share to deepening the China-ASEAN Comprehensive Strategic Partnership under the RCEP,” Liu said. The GBA, consisting of nine mainland cities in Guangdong province and the two special administrative regions of Hong Kong and Macao, has a total population of more than 86 million and a combined GDP of nearly $1.67 trillion. Addressing the conference in a video speech, Zhou Shuchun, a member of the Standing Committee of the CPPCC National Committee and publisher and editor-in-chief of China Daily, said, “Such fraternal vibes make us optimistic about the future of China’s relationships with her trading partners in the Asia-Pacific. “All of us will have a more nuanced idea about how cities in China’s Greater Bay Area can tap into the supply chain and demand in a wide diversity of markets through the RCEP framework, and lead the way in creating, to quote President Xi Jinping, once again, a unified, open, competitive and orderly market system,” he added. In her welcoming remarks to the conference, Hong Kong Coalition Deputy Secretary-General Eva Cheng said that the GBA is “China’s most powerful economic growth engine”, and added that the “RCEP is the world’s single largest free-trade agreement”. “Our theme is about connecting the two. It is about integrating the largest with the most powerful. Integration is a key word.” oswald@chinadailyhk.com