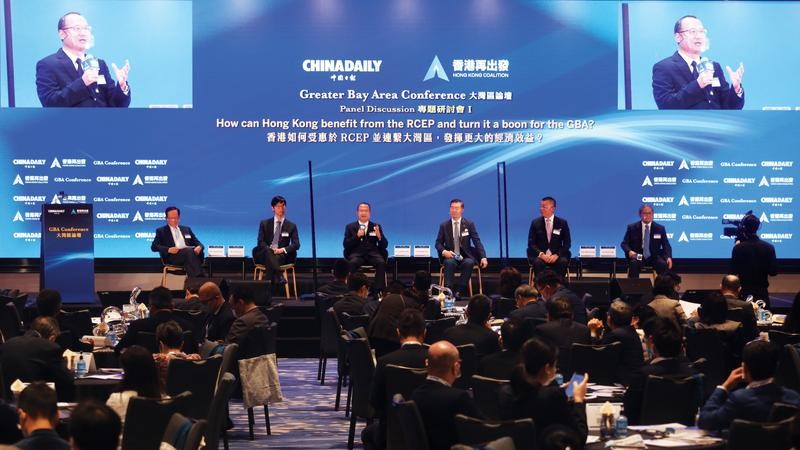 The ability to produce ingenious creations such as those that emerge from the Regional Comprehensive Economic Partnership is what their origin countries have in common — and that’s the common theme that unites Hong Kong and the RCEP’s member states as they orchestrate a collective melody. This is the takeaway from the Greater Bay Area Conference organized by China Daily and the Hong Kong Coalition on Tuesday. Victor Fung Kwok-king, group chairman of the Fung Group, opined that the region has been faced with many overlapping bilateral trade agreements, but each has its own unique definition of what it means to be a country of origin. What is very important is that the RCEP comes up with one common definition for a country of origin, and that is crucial to all practitioners, Fung noted. Therefore, what we should see is the creation of the next generation of global trade, he said, and it is the new World Trade Organization, which can encompass a new multilateral system. As Hong Kong has traditionally played a critical role in the WTO, the metropolis will see a similar role in this new development — in the innovation of the Guangdong-Hong Kong-Macao Greater Bay Area with the RCEP, Fung said. Looking at the whole Asia-Pacific region, Fung said the trading map of Asia is like an hourglass, and at the neck of the hourglass are Hong Kong and the Greater Bay Area. “Hong Kong and the Greater Bay Area will play a crucial role in linking the northern Asian economies to the southern ones,” Fung said, adding that he believes the “north-south flows within Asia” will be one of the most important flows in the world in the next decade. “We’re right in the middle of intermediating in this,” he stressed. Indeed, an inspection of the RCEP map reveals that Hong Kong, yet to be officially part of the RCEP, sits right in the middle of the member regions, remarked Jonathan Choi Koon-shum, chairman of the Guangdong-Hong Kong-Macao Bay Area Entrepreneurs Union. Hong Kong is internationally recognized for being an open, free economy, which is showcased in its valued presence and leverage in the Greater Bay Area and the ASEAN Free Trade Agreement. The city’s proven record in its economy and geographical vantage point makes the special administrative region well-placed to facilitate both the Chinese mainland market and international market to prosper, through connection and collaboration. This is not hard to decipher, given that “Hong Kong is the biggest investor in the Chinese mainland. Chinese companies want to go international. They can hardly make the jump on their own, but can do easily through Hong Kong. For investors who want to venture in the Greater Bay Area, they come first to Hong Kong,” Choi explained. It’s obvious to see Hong Kong has claimed the role of a “platform” and “springboard” that “brings the two sides (foreign and domestic) together”. This is aligned with the national goal under the 14th Five-Year Plan (2021-25), where China’s economic development is set to pivot on a dual circulation paradigm, Choi added. Choi said that Hong Kong stands a good chance of eventually getting into the RCEP as well as the Comprehensive and Progressive Agreement for Trans-Pacific Partnership. The RCEP is larger in scale and influence, with lower tariffs and simpler rules and procedures drawing in more trade partnerships, services and investments, he added. A good thing about RCEP is that there’s less restriction on the rules of service import, compared to Closer Economic Partnership Arrangement, said Witman Hung, principal liaison officer for Hong Kong at the Shenzhen Qianhai Authority. If these rules can be leveraged properly as a means to loosen restrictions on Hong Kong’s service trade with the mainland, it will pay dividends for both sides, he said. David Liao, co-chief executive of the Hong Kong and Shanghai Banking Corp, said the removal of rigid tariff barriers will invite more businesses, investments and capital flows to Hong Kong, which allows the SAR to enrich its expression of success through all forms of opening-up with the Chinese mainland to the international finance market. Liao finds the “chorus”, “unison” and “positivity” brought by the RCEP pretty encouraging. “We believe we’re heading to 50 percent of the global GDP share. Participating in this with tariff barriers removed will drive GDP growth by 1.6 percent and investment growth by 2.7 percent in the coming year.” On top of that, it’s empowering because “it’s dealt with rules of commonality and origins,” Liao reckoned. “It’s like a new language in the region.” A common language lays the foundation for mutual understanding, further spurring unity and coalition, he said. The impact of the RCEP which covers a whole list of countries is bound to be far-reaching. A ripple effect of the RCEP will radiate far and wide. Liao said HSBC strategically pivots to Asia because it is seeing that GDP and investment growth there are sustainable thanks to vigorous economic activities through the RCEP. “It helps us digitalize at scale,” Liao said of the digital journey of a bank to service payments and cash management in trade finance. “It helps when there’s a common language, a consistency and transparency.” Cyberport Chairman George Lam echoed that it’s not just a north-south trade superhighway – it’s also a digital highway. Lam called it the “new export”, taking the examples of Cyberport’s health technology and smart city solutions to help other economies. The government-owned Cyberport is a digital community of about 1,650 startups and technology companies, of which 200 are not local. “Now, it’s important for us to attract another 1,000 (of the) very best companies from the mainland to be here to reach out to the RCEP region,” he said. “We should become the super salesman for the Greater Bay Area and China and make ourselves more attractive to RCEP members by attracting the very best companies in China.” Contact the writers at jenny@chinadailyhk.com