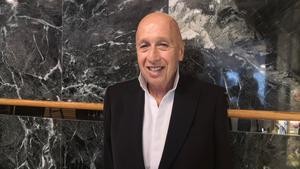 The signing of one of the world’s largest free-trade deals in history is a “game changer” that will shift the global business landscape, and Hong Kong should seize the opportunity and leverage its strengths in professional services, Hong Kong business magnate Allan Zeman said on Monday. The Regional Comprehensive Economic Partnership is “a giant step forward for Asia” and everyone will benefit, said Zeman, chairman of the Lan Kwai Fong Group. “As far as I’m concerned, the business will shift from the West to the East,” he said. On Sunday, 15 Asia-Pacific countries, including China, Japan, South Korea and 10 members of ASEAN, signed a huge regional free-trade pact after eight years of discussion and negotiation, marking the establishment of the world’s largest trading bloc. In an exclusive interview with China Daily, Zeman said people should realize that the deal is great for Asia, as it covers 2.3 billion people and the 15 member nations account for around 30 percent of global GDP. The trade pact, signed with the intention to reduce tariffs and break trade barriers, includes a mix of high-income, middle-income, and low-income countries. Zeman said he thinks all the people, rich or poor, will benefit from the pact because the RCEP makes it easy to do business within the region and it will improve people’s livelihoods due to the trickle-down effect. “The agreement gives a whole new opening to financial services, as well as manufacturing,” Zeman said, adding that reducing tariffs means that member countries can look to trade among each other more easily and become less dependent on Western countries, such as the United States and those in Europe. Noting Hong Kong has always been the “middleman” between the mainland market and the rest of world in view of its strength in financial services and its common law system and independent judiciary, the business mogul said the global financial hub will continue to provide a strong base for that. Though Hong Kong is not a member of the pact, the city, a free-trade port, stands to buttress its importance, Zeman said. Hong Kong has frequent business with RCEP members. In 2018, its trading volume with RCEP members reached US$808 billion, accounting for about 72 percent of its overall trading figure that year, according to the Hong Kong government’s Trade and Industry Department. With tighter trading ties among the 15 countries, Hong Kong is poised to benefit by keeping its door open and working closer with other countries and regions, he added. Zeman said the RCEP is also good news for the development of the Guangdong-Hong Kong-Macao Greater Bay Area, an 11-city cluster combining two special administrative regions and nine cities in Guangdong province. “We are talking about 72 million people within the Bay Area, but this (RCEP) makes the market even bigger,” he said. “I believe that with the strength of technology from Guangzhou and Shenzhen, which is the future of (the) innovation and technology industry, this can help every country in Asia get stronger.” Zeman added this will be a two-way cooperation. He said that trading between technologies will be the future of the world, and the Bay Area is tasked to rival the world’s established tech hub, Silicon Valley, in the long run.