Chai Hua and He Shusi 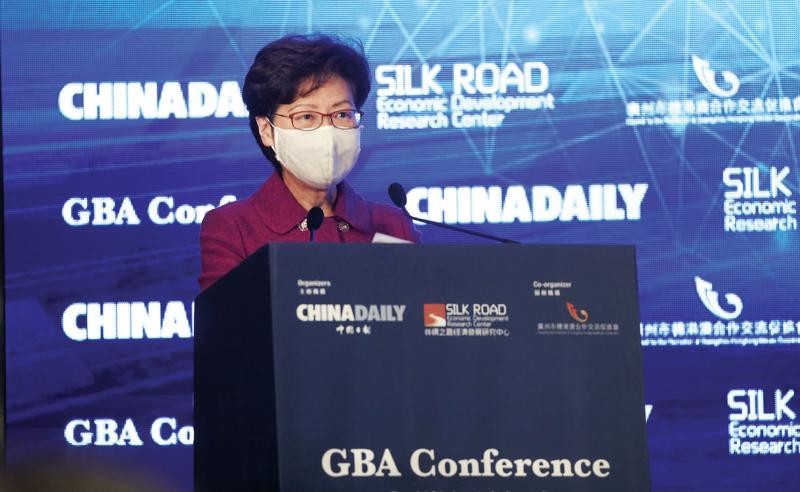 China’s efforts to expedite technology infrastructure construction have shown remarkable results and empowered digitalization to become a new driving force of economic growth, experts and business executives said. The digital economy’s contribution to GDP growth in the United States and South Korea has exceeded 91.8 percent and 100.8 percent respectively, according to a report from the China Academy of Information and Communications Technology. The percentage is about 60 percent in China, Germany, Britain, France, and India. Ba Shusong, managing director and chief China economist at Hong Kong Exchanges and Clearing Ltd, said at the Greater Bay Area Conference in Hong Kong on Wednesday that digital related industries have become an essential component of the global economy. The boom in e-commerce, online education, and online medical services amid the COVID-19 outbreak also reflected digitalization’s important role in boosting domestic consumption, he noted. He said that China’s online retail sales reached 8 trillion yuan (US$1.2 trillion) in the first nine months of 2020, increasing 9.7 percent year-on-year. His advice to seize the opportunities is to build information and data centers as data will become the “oil” in the digital-economy era, and to further promote the application of innovative digital technologies in business scenarios. Ashley Galina Dudarenok, founder of China-focused social media agency Alarice, and China insights and training company ChoZan, described living on the Chinese mainland as “living in the world beyond tomorrow”, thanks to the wide application of new technologies. She mentioned the use of virtual anchors and virtual livestreamers during the nationwide Double 11 Shopping Festival. She called on companies in Hong Kong and Macao to make good use of the Guangdong-Hong Kong-Macao Greater Bay Area’s connectivity as a window into the future. Taking e-commerce as an example, she emphasized it is about building an ecosystem, rather than just selling things online. “If a company wants to sell (something), they can plug into this ecosystem which can provide software, hardware, data analytics, financing, smart manufacturing, smart logistics etc.,” she explained. “In the Bay Area, we will be able not only to be part of this ecosystem but also to export potentially into the rest of the world.” The Bay Area is leading the way in technology infrastructure. Gordon Guo, deputy head of the internet and enterprise solution division at China Mobile Hong Kong, said that the company’s 5G service had covered 94 percent of the urban area in Hong Kong and more than 80 percent of the population. He said the Bay Area has a comprehensive range of industries, including finance, manufacturing and tourism, so it is “a very good scenario and environment (in which) to apply the new-generation communication technologies.” AI also plays an important part in new infrastructure and the Fourth Industrial Revolution, said Max Yuan, founder, chairman and CEO of Xiao-i, a leading artificial intelligence technology company in China. He stressed that it is not only about one industry, or only to create new industries, but that AI can serve as an enabler to transform and upgrade conventional industries. “New infrastructure is not just about online businesses or smart cities. It is about how all industries can embrace new technology and create more value through transformation and upgrades.” One challenge, Yuan said, is about how to apply a new concept or technology to people’s daily lives and to vest it with real business value, instead of empty talks with investors. There are many application scenarios for AI technology, from unqualified parts sorting in a factory and temperature control in a farm, to the interaction between government and residents in public services, Yuan said, “It is not something that we can only see in the future. We can realize them now.” Hence, Yuan said it is a critical moment for the Bay Area, China and the world to transform industries and integrate AI into scenarios like “air and water”. “If we move forward, we can create a huge impact during the process of transformation and upgrades.” Allen Yeung, former government chief information officer, founder and CEO of Intelli Global Corp Ltd, a big-data analytics services company, noted that under urbanization, cities are overloaded with people, creating issues such as infectious diseases and pollution. Hence, to develop a smart city under the new infrastructure push will provide a better and smarter way for the government to manage the city, Yeung said. But an appropriate framework and standards are missing for different cities to summarize and replicate their experiences and practices, he said. “We need different frameworks in terms of how we adapt innovation,” Yeung stressed. Innovation tends to push the boundaries of rules and regulations, he said. “So we cannot just sit and do nothing without changing such rules and regulations.” Tony Tsang, CEO of DYXnet Group, a carrier-neutral network service provider, thinks the Bay Area has similar resources to Silicon Valley, where a lot of the cities are very effective, and have a clear division of labor, from manufacturing and technology to software development. He believes that with Hong Kong’s international vision and renowned experience in financial services, the city can contribute to the strategic financial planning in new infrastructure development.