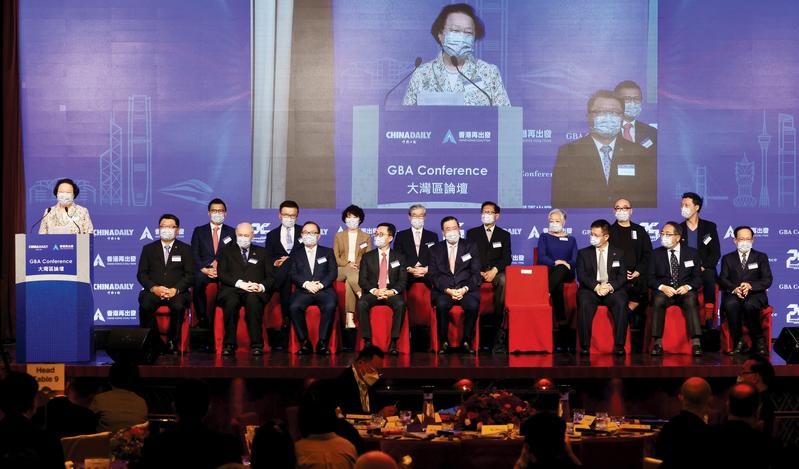 Hong Kong should accelerate its exploration, research and study of the changing situations in the Guangdong-Hong Kong-Macao Greater Bay Area so that the city can better perform its superconnector role in the building of the region. Political and business heavyweights made the observations on Thursday at the Greater Bay Area Conference 2022 and 25th Anniversary Ceremony of China Daily Hong Kong Edition, themed “GBA: Integration Writes a New Chapter”. Co-organized by China Daily and the Hong Kong Coalition, the conference consisted of three panel discussions on how to promote technology and innovation, forge financial connectivity, and preserve cultural heritage in the city-cluster area, which comprises the two special administrative regions of Hong Kong and Macao, and nine cities in Guangdong province. Over 400 people, including government officials, business leaders, and experts from the Chinese mainland, Hong Kong and overseas, attended the hybrid event. Leung Chun-ying, a vice-chairman of the Chinese People’s Political Consultative Conference National Committee, said that “knowledge about the changing situations on the other side of the tiny Shenzhen River is key”, as better cross-boundary mobility of resources such as professionals, capital, goods and electronic data, is needed. Leung cited as an example the fact that Chinese customs officials have released new measures regarding Nansha district of Guangzhou, and these measures included the freer flow of materials for biomedical research, the development of an international logistics center, and cross-boundary e-commerce and aircraft leasing businesses. But the recent development of the Greater Bay Area is not detailed in Hong Kong media reports, or analyses by Hong Kong research institutions, or commentaries by Hong Kong opinion leaders, Leung added. “What it means is that Hong Kong has to double up efforts of exploring, researching, studying, comparing, ‘tea-sipping’ and engaging on the other side of the river,” Leung said. “As the most international city in the Greater Bay Area, Hong Kong should reinforce the advantage as the superconnector to share our knowledge of the Greater Bay Area cities to entice international business partners.” Leung suggested media organizations, research institutions, chambers of commerce and professional bodies set up permanent branches in the Greater Bay Area cities to have “eyes and ears, arms and legs and voices on the ground”. Hong Kong Chief Executive John Lee Ka-chiu agreed. “Hong Kong and other Greater Bay Area cities continue to collaborate closely and complement one another to bring about enormous opportunities for our people, our businesses and our communities.” Lee added: “Hong Kong will leverage its highly market-oriented and internationalized business environment, its well-developed professional-services sectors, as well as the city’s status as an international financial, trade and shipping center” to develop the Greater Bay Area as a world-class city-cluster for living, traveling and working. “As the world’s freest economy and the largest offshore renminbi business center, Hong Kong is the ideal gateway to connect international investors with the mainland on the one hand and help channel mainland funds to the global market on the other,” Lee said. Maria Tam Wai-chu, deputy secretary-general of Hong Kong Coalition, said that the integration not only refers to infrastructural integration in transport and communication networks, “but also in our rules and regulation, administrative and professional practices and cooperation”. Tam said that Guangdong province has a complete chain of economic activities, but the services sector is comparatively less strong than the primary and secondary industries. “Here is where Hong Kong can play a vital role with our strong third-sector services and our links to the world markets,” she said. “This is a perfect combination to create an even more powerful economic growth engine.” In 2021, the total gross domestic product of the Greater Bay Area was about 12.6 trillion yuan ($1.77 trillion), and 25 of its corporations were in the top 500 globally. The city-cluster area has over 50 unicorns (startups with a value of over $1 billion) and over 1,000 incubators. It also boasts the majority of the over 60,000 high-technology companies in Guangdong. Qu Yingpu, publisher and editor-in-chief of China Daily Group, said the Thursday conference invited some of the finest minds in the region to unravel the nuances embedded in the idea of the Greater Bay Area, and to find some well-thought-out responses to some questions. “Will Hong Kong be able to use its financial services and legal assistance facilities to boost trade ties between fellow Greater Bay Area member cities and their international partners? How effective is its role as a cultural bridge connecting the Greater Bay Area with the rest of the world going to be, and what does Hong Kong stand to gain in the process?” Qu asked. In addition to inviting business leaders, think tanks, academics, and media professionals, the roundtable also invited local consuls general. One of them was Almas Seitakynov, the Kazakhstan consul general for Hong Kong and Macao. “The Greater Bay Area is to develop human resources and high technology. I think this is a good opportunity for other countries to develop together. For example, a lot of companies from Kazakhstan open their offices in the Greater Bay Area and have very successful development,” he said on the sidelines of the conference in an interview with China Daily. In addition to the roundtable conference on how various stakeholders can forge ahead with the Greater Bay Area blueprint, the Thursday event also featured the 25th anniversary of the China Daily Hong Kong Edition. “In 25 years, China Daily has extended its reach and beyond the country, and has at the same time enhanced its international following and influence,” Leung said. “It is now a major, comprehensive and reliable source of information on the country’s latest developments.” Zhou Li, deputy editor-in-chief of China Daily Group and publisher and editor-in-chief of China Daily Hong Kong, agreed. “We add an important new voice to the local media and play an ambassadorial role in helping China to forge stronger political and economic ties with other countries and step up social and cultural exchanges,” he said. “We also helped unpack the idea of ‘one country, two systems’, and articulate its ambitions,” Zhou added.