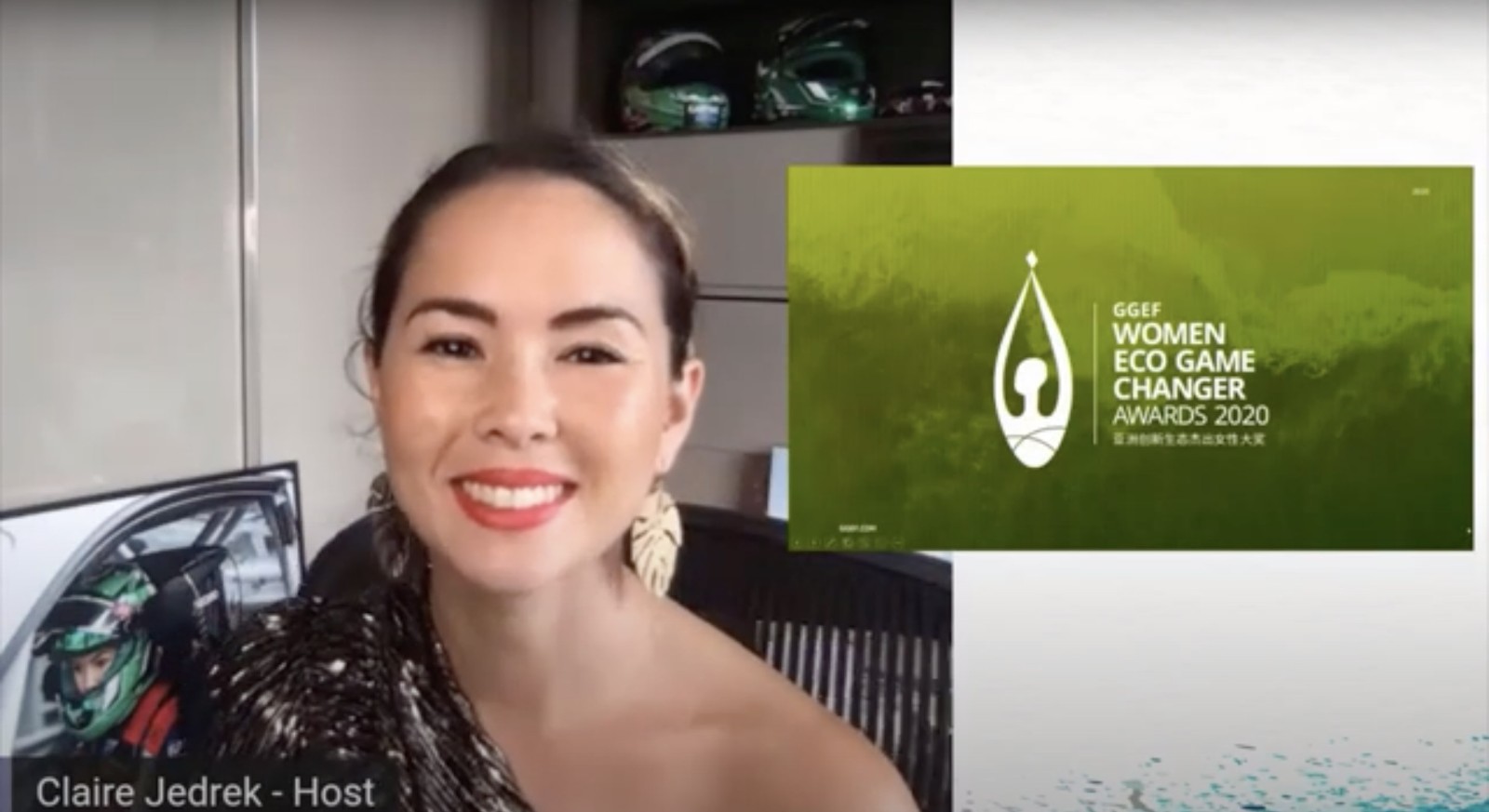 GGEF Women Eco Game Changer Awards 2020 Winners Unveiled Four Beacons of Sustainability honoured at the 4th Annual Awards Ceremony ASIA, 09 December 2020: GGEF (Global Green Economic Forum) today announced the latest leading lights to be recognised as champions of sustainability and women’s empowerment in business, at their fourth annual awards ceremony. Michelle Wong of Rooftop Republic Urban Farming, Liz Wong Ying Tung of Growth Playground, Dr Noryawati Mulyono of PT Seaweedtama Biopac, and Sahar Mansoor of Bare Necessities Zero Waste Solutions, received the awards after demonstrating their commitment to tangible environmental and social impact. The ceremony was the first to be conducted virtually due to the current COVID-19 pandemic. Since its inception in 2017, the GGEF has recognised 19 game changers who have been pushing the boundaries of innovation in the intersection between women’s empowerment and the environment. GGEF Founder and CEO, Christina Lee, commented: “I am delighted to welcome these four inspiring women to our alumni of past winners. Now, more than ever, we need female leaders to show the way in what is possible when it comes to driving societal and environmental change. This year has been enormously challenging for everyone, but we must not lose sight of what is possible, and each of these women entrepreneurs have, in their own way, continued to do just that.” Using an entirely new virtual format, the awards night gathered leading figures, influencers, and experts from the government, academia, business and cultural sectors to honour the winner’s accomplishments and celebrate the fourth edition of the awards. Christina Lee continued: “At GGEF we believe that recognising and empowering women is essential. We still live in a world where women are significantly underrepresented in entrepreneurship, especially when it comes to climate finance, and make up far less than 50% of attendees at critical international environmental events such as COP (the UN Climate Conference). Yet, at the same time they are disproportionately affected by the impact of the negative changes to our environment.” This year’s winners come from diverse array of industries and cultures, underpinning the growing community committed to change in the area of women’s empowerment and the environment. Michelle Wong, who was recognised with The Social Eco Game Changer award, was raised in Singapore but now living in Hong Kong, co-founded Rooftop Republic Urban Farming in 2015, a startup focused on food and sustainability, and the promotion of the urban farming movement. The Eco Innovator award went to Dr Noryawati Mulyono, Co-Founder of PT Seaweedtama Biopac, a company that aims to solve plastic pollution by manufacturing seaweed-based packaging to replace non-degradable single use packaging. Miss Liz Wong Ying Tung was awarded The Eco Star of China award for her dedication in eliminating generation and plastic production in toys industry by reduction, reuse, recycling and upcycling. Miss Wong established ANEWTOYS in 2017 as a social innovation project under the company GROWTH PLAYGROUND. Last but not least, the Eco Star of Asia award went to Sahar Mansoor, CEO and Founder of Bare Necessities, a zero-waste social enterprise. The company takes a people-centered and earth-centered approach by addressing serious flaws in manufacturing, distribution, and consumption, by innovating and providing sustainable solutions to waste. About GGEF GGEF is purpose-driven enterprise headquartered in Singapore that runs events, awards and workshops to empower future leaders and women eco warriors in sustainability. GGEF reinvest part of its income to foster future leaders in building a sustainable environment and community. The famous “One-to-A-Million” sponsorship provides outstanding youth in Asia to attend international events such as 2041 International Antarctic Expedition. About GGEF WOMEN ECO GAME CHANGERE AWARDS GGEF Women Eco Game Changer Awards is the first and only awards in Asia that promotes sustainability and women empowerment, giving recognition to women who are leading and inspiring change, making an impact in the community and environment through innovation. The inaugural GGEF Women Eco Game Changer Awards was successfully launched in 2017. About China Daily Founded in 1981, China Daily covers 33 million readers and users worldwide through diversified platforms, including newspapers, websites, and mobiles and social media. The number of China Daily’s followers has now reached 55 million on Weibo, 9.5 million on the WeChat Blog platform, 99 million on Facebook and another 4.39 million on Twitter.  About China Daily Asia Leadership Roundtable The China Daily Asia Leadership Roundtable is a by-invitation network of movers and shakers in Asia, providing platforms for focused dialogue, issue investigation and possible collective action on strategic issues relating to Asia’s economic, business and social development. Our aim is to enhance communication and increase mutual understanding between China, Asian and Western countries. Roundtable events are held in major cities across Asia.