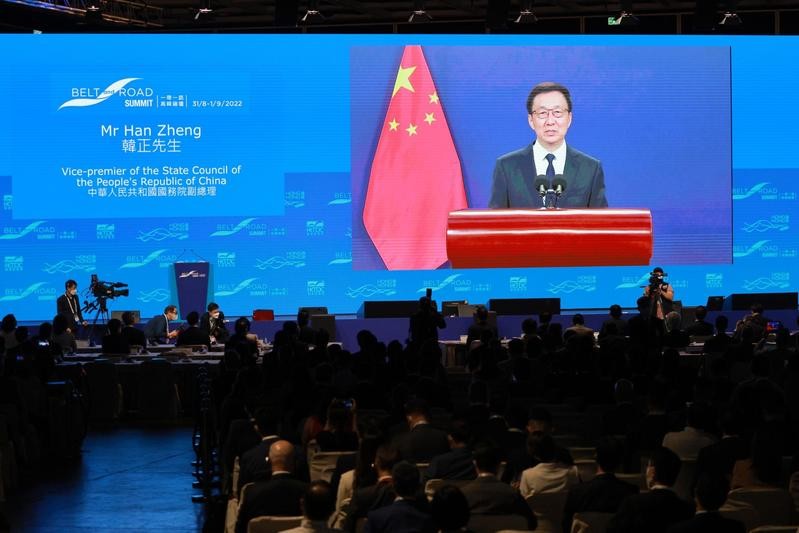 Hong Kong has served as a critical gateway to boosting progress in trade and investment under the Belt and Road Initiative since the BRI was launched nine years ago, government officials and business leaders said at the seventh Belt and Road Summit on Wednesday. Vice-Premier Han Zheng said at the summit that Hong Kong is an active participant in, contributor to and beneficiary of the Belt and Road Initiative. Han expressed the central government's full support for the city in maintaining its distinct position and advantages, and in actively participating in and contributing to the Belt and Road. Han, who is also a member of the Standing Committee of the Political Bureau of the Communist Party of China Central Committee, made the remarks via video link in his opening speech to the summit. With the theme "Heralding a New Chapter: Collaborate and Innovate", the two-day conference is jointly held by the Hong Kong Special Administrative Region's government and the Hong Kong Trade Development Council. It is among the major events this year marking the 25th anniversary of the establishment of the Hong Kong SAR. Highlighting Hong Kong's strong connection with the Chinese mainland and the rest of the world, Han said the city should proactively promote more practical regional cooperation. "We support Hong Kong in maintaining a free, open and regulated business environment, developing smooth and convenient international links as well as closer exchanges and cooperation with more countries, and expanding economic and trade cooperation networks," Han said. The vice-premier also outlined his hopes for Hong Kong to strengthen professional services, enhance cultural and education exchanges and deepen collaboration with the mainland. Since President Xi Jinping proposed the BRI in 2013, China has signed cooperation documents with over 180 countries and international organizations, covering policy, infrastructure, trade, finance and people-to-people exchanges. Total trade among economies involved in the initiative exceeded $10 trillion, while direct investment surpassed $140 billion. Hong Kong Chief Executive John Lee Ka-chiu, who also attended the summit on Wednesday, said in his opening address at the summit that Hong Kong will continue to play the role as "a pivotal gateway" for the Belt and Road Initiative, pledging to maintain the Asian financial hub's long-standing support for and practice of free markets and multilateralism. Lee said various Belt and Road collaboration programs have been established in Hong Kong, and the government has also partnered with related parties to provide Belt and Road networking opportunities for companies and professionals. Hong Kong has everything needed by companies and economies involved in the BRI as well as the projects they partner in, including project financing and professional services support, innovation and technology, capacity building, cultural awareness and wide-ranging connections, Lee said. Hong Kong is also seeking early accession to the Regional Comprehensive Economic Partnership, the world's largest free trade agreement, which covers about 30 percent of global GDP, Lee added. "Joining the RCEP is a natural step for Hong Kong. It'll enable us to deepen the collaboration and connections we enjoy with our close partners," he said. Peter Lam Kin-ngok, chairman of the Hong Kong Trade Development Council, said the Belt and Road Initiative, with collaboration as its key concept, has been bringing nations together, not only through physical infrastructure but also with the flow of capital, knowledge and information. "With innovation driving progress, this initiative provides the framework to apply these innovations to create a sustainable future," Lam said. Given Hong Kong's strategic location, as well as its position as a global financial center and the mainland's international gateway, the city can always create opportunities by bringing together people, knowledge and capital, he said.