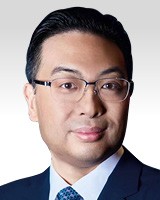 Dr. Johnny Hon is a Hong Kong born businessman and Founder of the Global Group. In just over twenty years, he has built up an international conglomerate with diverse interests ranging over banking, biotechnology, education, entertainment and leisure, financial services, financial technology, media, mining, property development and sports.

Whilst building the Global Group of Companies, Dr. Hon has also managed to pursue a wide range of charitable, diplomatic and political interests. He is a Fellow and Diamond Benefactor of the Duke of Edinburgh’s Award World Fellowship, a Founder Benefactor of Asia House in the UK, and serves on the committees of numerous Hong Kong charities. In July 2015, he was awarded the Medal of Honour (MH) from the Government of the Hong Kong Special Administrative Region of the People’s Republic of China for his dedicated community service, particularly for his contributions to the work of the Lok Sin Tong Benevolent Society, Kowloon.

In 1985, at the age of thirteen, Dr. Hon moved to the United Kingdom to study at Uppingham School. He graduated from King’s College London with a degree in Biomedical Science prior to completing a Ph.D. in Psychiatry at Hughes Hall College at the University of Cambridge. Dr. Hon also holds postgraduate qualifications from the School of Oriental and African Studies at London University and from Harvard University. He completed applied neuroscience, financial technology, blockchain and cryptocurrency executive education courses at both New York University and the Massachusetts Institute of Technology (MIT) and has been a guest Professor at a number of well-known Chinese universities.

Dr. Hon is the Honorary Consul for Grenada in Hong Kong as well as the country’s Ambassador-at-Large. He is a Vice Chairman of the New People’s Party, and a standing member of the Heilongjiang Provincial Committee of the Chinese People’s Political Consultative Conference (CPPCC).