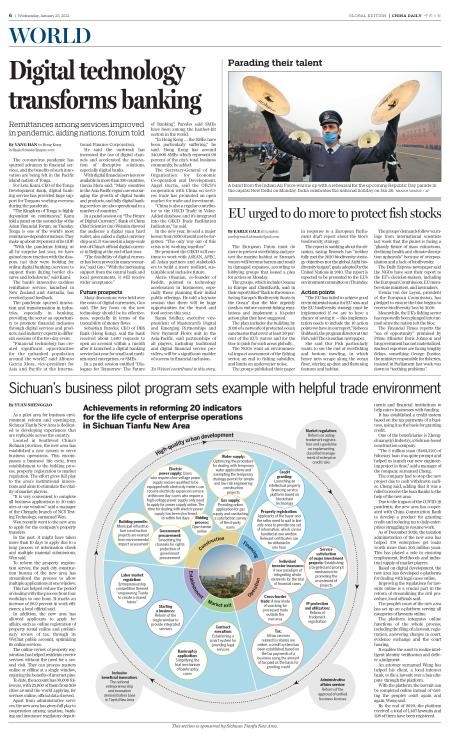 Remittances among services improved in pandemic, aiding nations, forum told The coronavirus pandemic has spurred advances in financial services, and the benefits of such innovation are being felt in the Pacific island nation of Tonga. For Leta Kami, CEO of the Tonga Development Bank, digital banking service has provided huge support for Tongans working overseas during the pandemic. "The Kingdom of Tonga is highly dependent on remittances," Kami told a panel on the second day of the Asian Financial Forum, on Tuesday. Tonga is one of the world's most remittance-dependent nations. They make up about 38 percent of its GDP. "With the pandemic hitting us all by surprise last year, we have gained more traction with the diaspora (as) they were looking for online digital banking (services) to support them during border closures and lockdowns," said Kami. The bank's innovative cashless remittance service, launched in New Zealand and Australia, has received good feedback. The pandemic spurred innovation and transformation in industries, especially in banking, providing the sector an opportunity to promote financial inclusion through digital services and products, said industry experts in different sessions of the two-day event. "Financial technology has created significant opportunities for the unbanked population around the world," said Alfonso Garcia Mora, vice-president for Asia and Pacific at the International Finance Corporation. He said the outbreak has increased the use of digital channels and accelerated the innovation of disruptive solutions, especially digital banks. With digital financial services now available in more than 100 countries, Garcia Mora said: "Many countries in the Asia Pacific region are encouraging the growth of digital banks and products, and fully digital banking services are also operational in a number of countries." In a panel session on "The Future of Digital Currency", Bank of China Chief Scientist Guo Weimin showed the audience a digital yuan hard wallet, also called a digital currency chip card. It was used in a large-scale test of China's official digital currency in Beijing at the end of last year. "The feasibility of digital currency has been proved in many scenarios," said Guo. "With the increasing support from the central bank and local governments, it will receive wider acceptance." Future prospects Many discussions were held over the costs of digital currencies, Guo said. The key focus on the new technology should be its effectiveness, especially in terms of the traceability of money flows. Sebastian Paredes, CEO of DBS Bank (Hong Kong), said the bank received about 1,400 requests to open an account within a month after it launched a digital banking service last year for small and medium-sized enterprises, or SMEs. In a panel session entitled "Dialogues for Tomorrow: The Future of Banking", Paredes said SMEs have been among the hardest-hit sectors in the world. "In Hong Kong… the SMEs have been particularly suffering," he said. Hong Kong has around 340,000 SMEs which represent 98 percent of the city's total business community, he added. The Secretary-General of the Organisation for Economic Co-operation and Development, Angel Gurria, said the OECD's cooperation with China on services trade has promoted an open market for trade and investment. "China is also a regular contributor to the OECD Trade in Value-Added database, and it's integrated into the OECD Trade Facilitation Indicators," he said. In the new year, he said a major lesson from 2020 should not be forgotten. "The only way out of this crisis is by working together." He promised the OECD will continue to work with ASEAN, APEC, all Asian partners and stakeholders to build a more resilient, sustainable and inclusive future. Alexis Ohanian, co-founder of Reddit, pointed to technology acceleration in businesses, especially those planning their initial public offerings. He told a keynote session that there will be huge opportunities for the travel and food sectors this year. Rama Sridhar, executive vice-president of Mastercard's Digital and Emerging Partnerships and New Payment Flows unit in the Asia-Pacific, said partnerships of all players, including traditional and digital financial service providers, will be a significant enabler of success in financial inclusion. Xu Weiwei contributed to this story. kelly@chinadailyapac.com