HK has new role to play in national plan 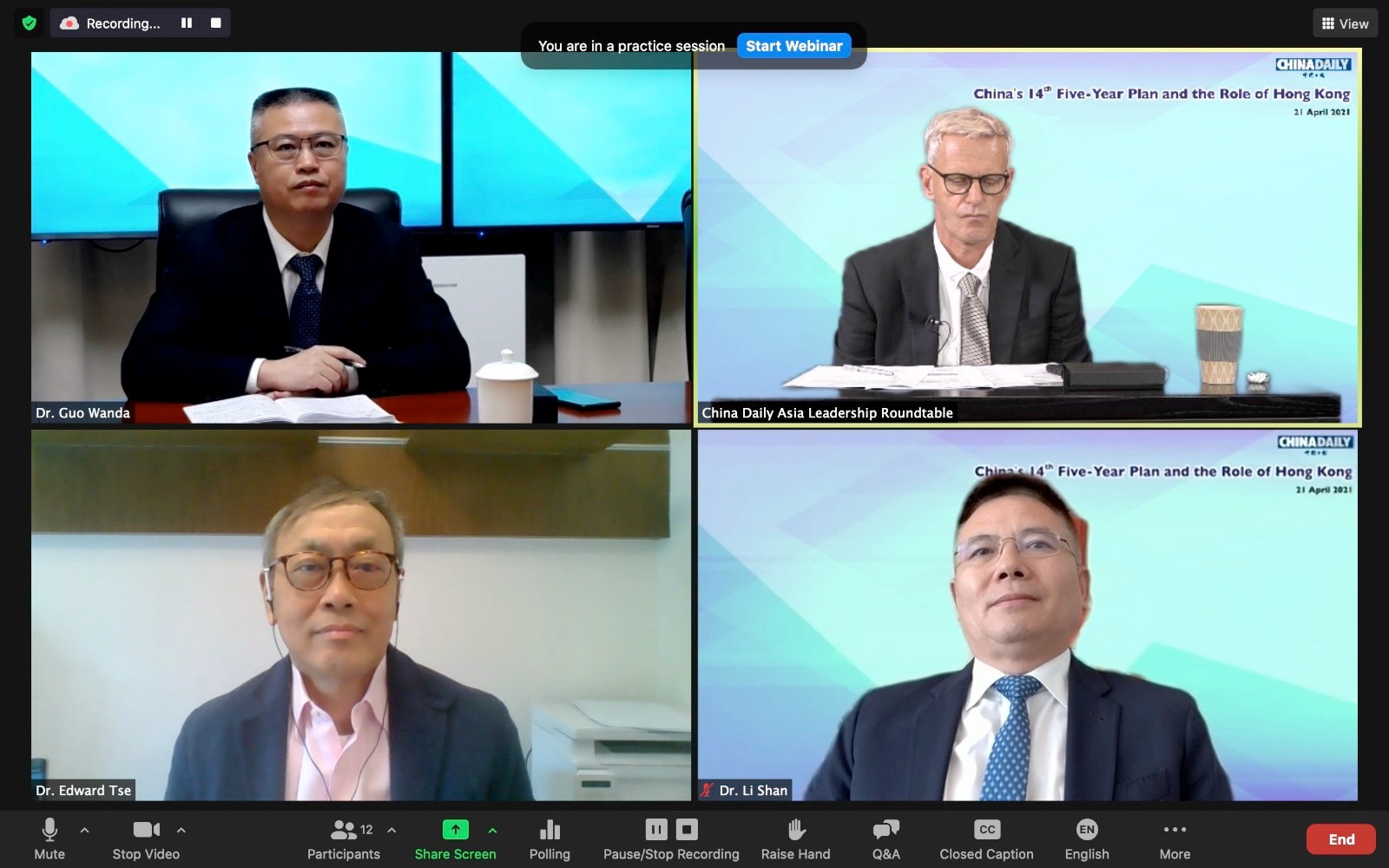 HONG KONG - As the Hong Kong Special Administrative Region (HKSAR) looks to become more relevant on the national stage, the city should give full play to a whole package of new roles highlighted in the country’s top development planning document and hook into the grand story of economic transformation unfolding in the world’s second-largest economy, industry leaders and experts told the China Daily Asia Leadership Roundtable in the HKSAR on Wednesday. Speaking at a webinar panel titled “China’s 14th Five-Year Plan and the Role of Hong Kong”, Guo Wanda, executive vice-president of the Shenzhen-based China Development Institute, said the 14th Five-Year Plan (2021-25) pledged to cement the city’s strengths as a financial, maritime and trade center. “At a critical, historic juncture, the grand national economic and social development plan has more to offer,” Guo said. It offered unwavering support for turning the HKSAR into an international aviation hub and a global offshore renminbi business hub. Meanwhile, it underscored the HKSAR’s brand-new or rarely mentioned roles as an international asset management and risk management center, a global innovation and technology hub, a center for international legal and dispute resolution services in the Asia-Pacific region, a regional intellectual property trading center, as well as an exchange center for arts and culture between the mainland and the world, Guo said. Guo, who is also vice-chairman of the Chinese Association of Hong Kong and Macao Studies, said he believes the financial center has what it takes to give full play to its new roles and functions across the Guangdong-Hong Kong-Macao Greater Bay Area. Despite the previous two tumultuous years, the city rose to fourth in the 29th edition of the Global Financial Centres Index report, which was published in mid-March by the China Development Institute in partnership with City of London think tank Z/Yen Group. The city ranks behind New York, London and Shanghai, but ahead of Singapore, Beijing and Tokyo, on the back of a strong IPO market benefiting from overseas-listed mainland enterprises that are making a beeline for home, and a whole package of financial links between the HKSAR and the mainland, Guo said. Edward Tse, founder and CEO of Gao Feng Advisory, said economic transformation takes center stage in the nation’s 14th Five-Year Plan, and the Bay Area has all the elements required to play a key role in regional economic transformation. Tse highlighted mobility, smart infrastructure, connectivity, digital lifestyle and internationalization as five key factors that will drive the Bay Area’s development. “The innovations and new ideas during the pandemic will continue into post-pandemic times, embedding into people’s lifestyles and companies’ operations,” he said. These include three major trends — smart transportation, smart healthcare and digital currency. Broadening partnership The HKSAR should lose no time in taking part in these developments through cooperation with the mainland, especially with Bay Area cities, to promote and benefit from digitalization, Tse said. He said he believes the HKSAR is on the way to becoming the capital of cryptocurrency, with the city’s free flow of capital and low-interest-rate environment. As Chinese mainland accelerates the development of digital currency, Hong Kong will have more roles to play, Tse said. Africa has a huge demand for infrastructure and basic commodities, which creates substantial business opportunities, he said. As the mainland keeps enhancing trade partnerships with African countries, Tse said, the HKSAR’s professional services in global trading will help it establish more business opportunities in China-Africa relations and the Belt and Road Initiative. Echoing Tse, Li Shan, CEO of Silk Road Finance, said the country’s new Five-Year Plan will create unprecedented opportunities for the HKSAR in the new economy and smart city development. As a financial center, the HKSAR serves as a bridge for the mainland and the rest of the world, Li said. The HKSAR has the potential to become a data hub for Asia in the country’s technology outlook, he said. “It is not just about data storage, but utilizing technology to develop new businesses and even new governance, fueled by the city’s strong capacity in scientific research,” Li said. When it comes to the HKSAR’s rival Singapore, he said he believes Asia is big enough for more than one data center. Plus, the HKSAR has unique advantages under the “one country, two systems” principle, where it has the mainland as a huge market for new technology and service-oriented digitalization. heshusi@chinadailyhk.co