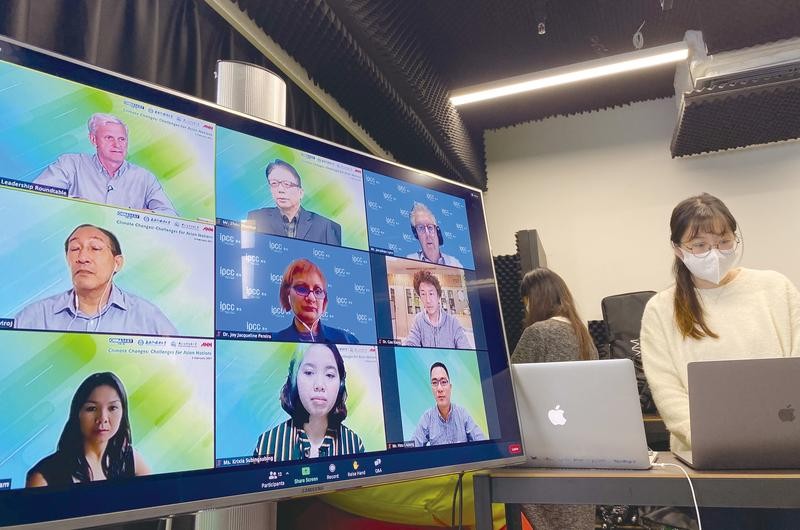 By reporting on the progress of climate change in Asia, members of the media in the region have contributed to the joint efforts made by different countries to tackle the global challenge, a webinar panel heard on Friday. “The media plays an indispensable and irreplaceable role in global climate progress,” said Zhou Shuchun, Standing Committee member of the Chinese People’s Political Consultative Conference National Committee, and editor-in-chief of China Daily. China Daily is a member of Asia News Network, an alliance of 23 news organizations in the region. Noting that ANN members have jointly offered the world “Asia’s voice along with Asia’s views”, Zhou said the efforts have “fostered favorable public opinion in the international community, which further facilitates Asian nations in their joint endeavor to tackle the global challenge”. Zhou was delivering his welcoming remarks at a webinar themed “Climate Changes: Challenges for Asian Nations”. The event was co-organized by China Daily, China’s University of International Business and Economic and Shanghai International Studies University, and ANN. “China Daily would like to further strengthen communication and cooperation with ANN members and other media, and join hands to make an even greater contribution to tackling global challenges such as climate change,” he said. During a panel discussion, members of the media from around Asia and other climate change experts exchanged insights. “If you focus on the doom and gloom (side of climate change), people tend to switch off,” said Jonathan Lynn, head of communications and media relations, Intergovernmental Panel on Climate Change, an intergovernmental body of the United Nations. To raise people’s awareness of climate change, it’s best to have stories from a positive angle to show people how a solution can be achieved and share best practices, he said. For example, coverage focusing on the tragedies caused by natural disasters may not be something that people want to focus on, while bringing in such discussions on climate change in the coverage may make people think the reporter is being heartless. “If you can bring a story where you show how the community has come together and dealt with this crisis, and maybe come to a longer-term solution where they can make their community stronger afterwards, this taps into a sort of deep, almost mythological kind of need in humanity,” said Lynn. Zofeen Ebrahim, Pakistan editor for online platform The Third Pole, said covering climate is complicated as it is an abstract topic. “There is a lot of science involved in it,” she said, adding that the coverage requires learning, researching and deciphering the language of the scientists. In Pakistan, Ebrahim said, a key challenge in reporting climate change is that many journalists consider it as science and a difficult subject that they feel less familiar with and that requires more time. “For women especially, they feel they do not have the luxury to go into the field, while most climate stories require you to go to remote places,” she said. “We need to come up with a way to formulate or even to entice Pakistani journalists to do good journalism (on climate change topics),” said Ebrahim. As she sees it, providing good journalism is the cheapest and the most economical way to tell people that the health of the planet is at stake. Krixia Subingsubing, a Philippine Daily Inquirer reporter, said most people in the Philippines are aware of the connection between climate change and the extreme weather events the country experiences. “Because we actually feel it gets worse every day. Our fatalities rise with every new disaster that’s coming to our country,” she said. Between 2010 and 2019, a total of 12,097 people died from natural extreme events and disasters in the Philippines, according to data from the Philippine Statistics Authority. The damage incurred amounted to 463 billion pesos (US$9.63 billion). But Subingsubing said there are still challenges in getting people more involved in the topic. “Our paradigm right now is that climate change is really a communications battle,” she said, adding that relevant stories not only need to combat “climate change deniers”, but also need to focus on how to draw attention from people who are indifferent to the topic to learn the science behind it. “The road to net-zero is fraught with many challenges,” said Jessica Cheam, founder and managing director of Eco-Business, a media organization focusing on sustainable development. Cheam said the world has made tremendous progress in tackling climate change, with many Asian countries making net-zero pledges. “What’s encouraging to see is that not just countries started to make net-zero pledges, but the corporates are also starting to make these pledges.” Noting that many companies are making such commitments to benefit from the publicity, she stressed the need for the media to scrutinize these pledges and look into the details. In addition, Cheam said, cooperation among governments still needs to be improved in Asia, and multilateralism and trust are required to promote such development. The panel was moderated by ANN Executive Director Pana Janviroj and DJ Clark, multimedia director of China Daily Asia Pacific. kelly@chinadailyapac.com