Intelligent manufacturing shown to be critical 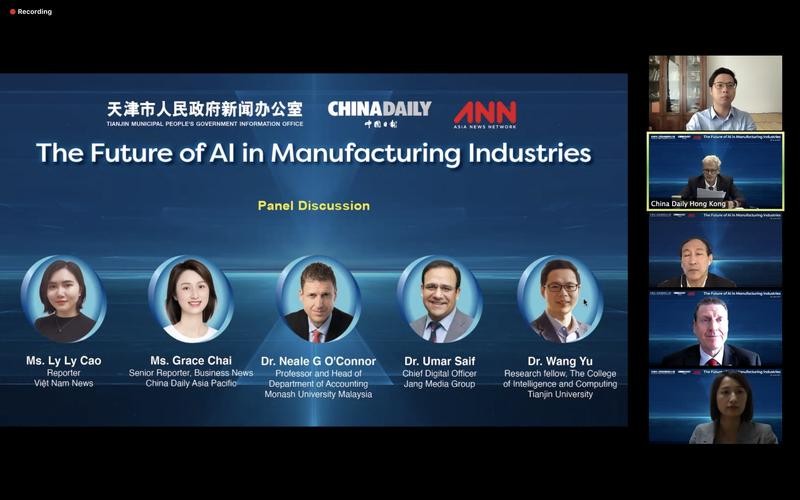 Artificial intelligence is key to sustaining the future of the manufacturing industry, with the pandemic showing the need for efficient and automatic production, an AI expert said on Friday at a webinar in Hong Kong. Wang Yu, research fellow at the College of Intelligence and Computing in Tianjin University, said while many businesses suffered because of the pandemic, this “huge public health crisis” has also made them “realize the importance of artificial intelligence and intelligent manufacturing”. These enterprises now “understand that intelligent manufacturing can reduce the need for large numbers of people (to be physically present in factories),” Wang said in his keynote speech at the online forum on “The Future of AI in Manufacturing Industries”. The forum was jointly organized by the Tianjin Municipal People’s Government Information Office, China Daily and the Asia News Network, an alliance of 23 leading media outlets across 20 Asian countries. Wang said that “efficient automated production is the future of the manufacturing industry”. He cited how businesses in Tianjin are keen to implement intelligent manufacturing in their operations. The northern Chinese city of Tianjin is home to some of China’s biggest manufacturing companies. Wang said a survey of 472 enterprises in Tianjin last year revealed that “generally, they’re paying more attention to intelligent manufacturing”. He said that more than 45 percent of respondents have overall planning, and the production planning for intelligent manufacturing. Over 65 percent, meanwhile, are carrying out standard implementation of an integrated management system. “Tianjin considers intelligent manufacturing as a rare opportunity for economic development,” he said. Wang said that AI is being developed in the rest of China, too — and was even before the pandemic. He noted that in 2017, the State Council launched the Next Generation Artificial Intelligence Development Plan. This, he said, has led China to nurture homegrown talent, increased the number of patent applications and papers published on artificial intelligence. Neale G. O’Connor, professor and head of the Department of Accounting at Monash University in Malaysia, said that AI can help solve various problems in manufacturing. But in most companies across Asia, “A big challenge in some factories is the owner’s mindset,” O’Connor told the webinar. “Many owners don’t have a strategic vision for making it possible for the factory to make A-class products. They have gone from product to product very much, not so focused on developing the talent and the skills in their organizations.” He said Asian manufacturers need to “focus on continuous improvement and trying to digitalize different areas where you are collecting data, just like in the assembly line”. These companies can also learn from original equipment manufacturers in developed countries which have put such systems in place, he said. “A lot of factories today (are) at the continuous improvement stage. We need a lot more effort to move to the next stage of digitalizing so we can start to capitalize on the opportunities that AI brings us,” O’Connor said. He said that while AI can benefit many industries, it’s currently the automotive sector that “is actually leading the field in this area”. “Major auto manufacturers around the world and in China are adopting Industry 4.0 and AI already, and they are able to do that because of a large volume and automated systems. (They) save lots and lots of data, which makes it amenable to AI algorithms and machine learning and deep learning,” O’Connor said. Masahiro Nakamura, CEO of Tokyo-based Lexer Research Inc, said most companies are “racing to the AI technologies for much functioning more recently, but there are different difficulties in the production process, production and resource management”. He proposed the use of “deep thinking” as an alternative approach to deep learning, or machine learning. He said deep thinking can be used in factory planning, automation and intelligent logistic design. prime@chinadailyapac.com